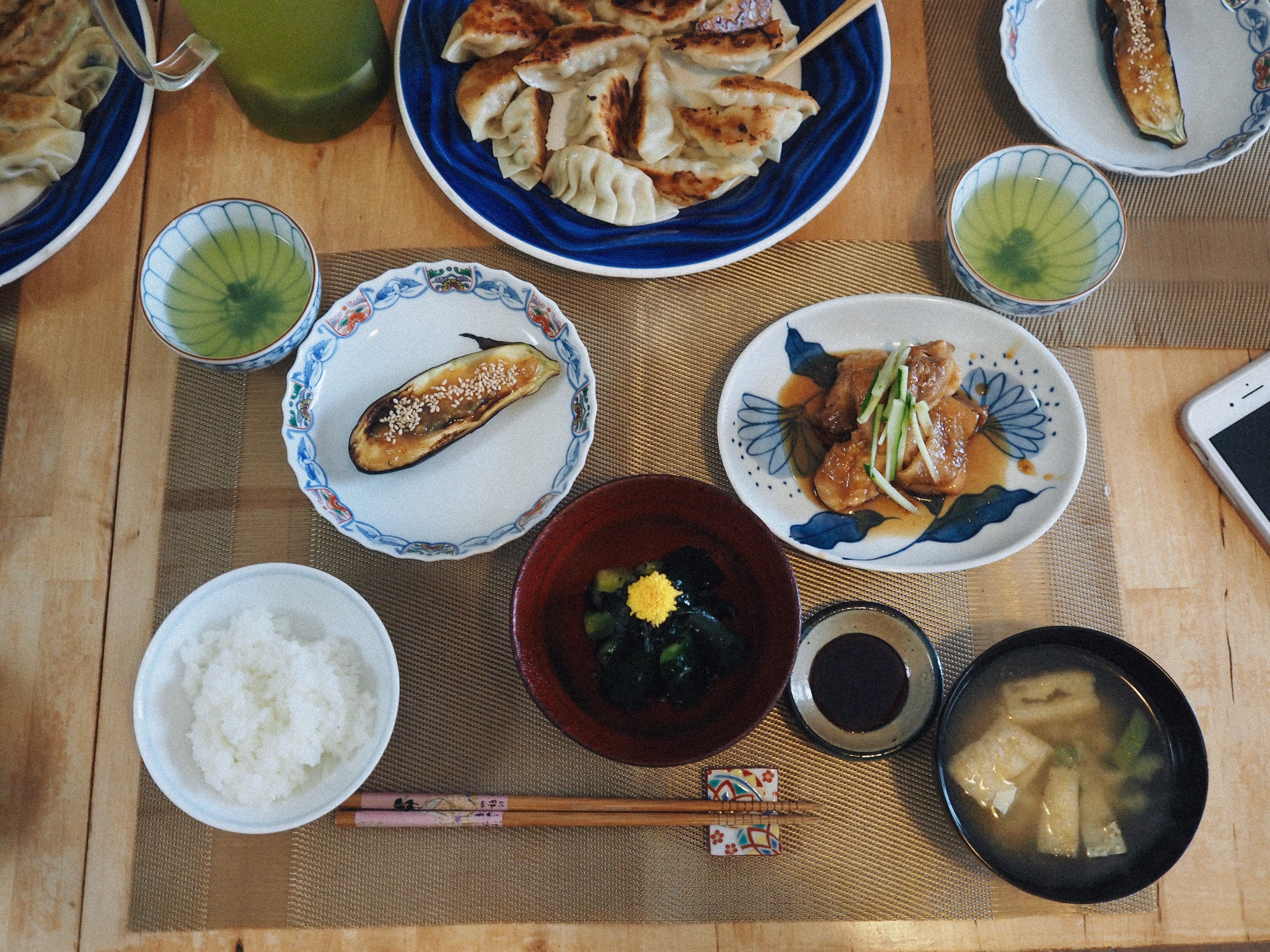 ou might not know this about me, but one of my hobbies is actually cooking! My mum was my inspiration, she is the cook of the household and makes all these delicious Chinese-Vietnamese meals that I grew up with. I have always loved watching her cook and wanted to be just like her when I was young. Unfortunately, cooking Chinese cuisine is very hard because there are no measurements for seasonings…only guessing! In high school, I started cooking more western cuisine, experimenting with Italian, Spanish and even Mediterranean dishes, although I still wanted to learn the secrets of Asian cooking just like my mum did.

When I was looking at activities to do in Tokyo, I was surprised to find that cooking classes were actually rated in the top #5 things to do whilst travelling in Japan. One in particular, Mayuko’s Little Kitchen, had spectacular reviews and a lot of people recommending her! I was fortunate enough to have a chance to join one of her cooking experiences to create a traditional Japanese home cooked meal for all of us to enjoy. 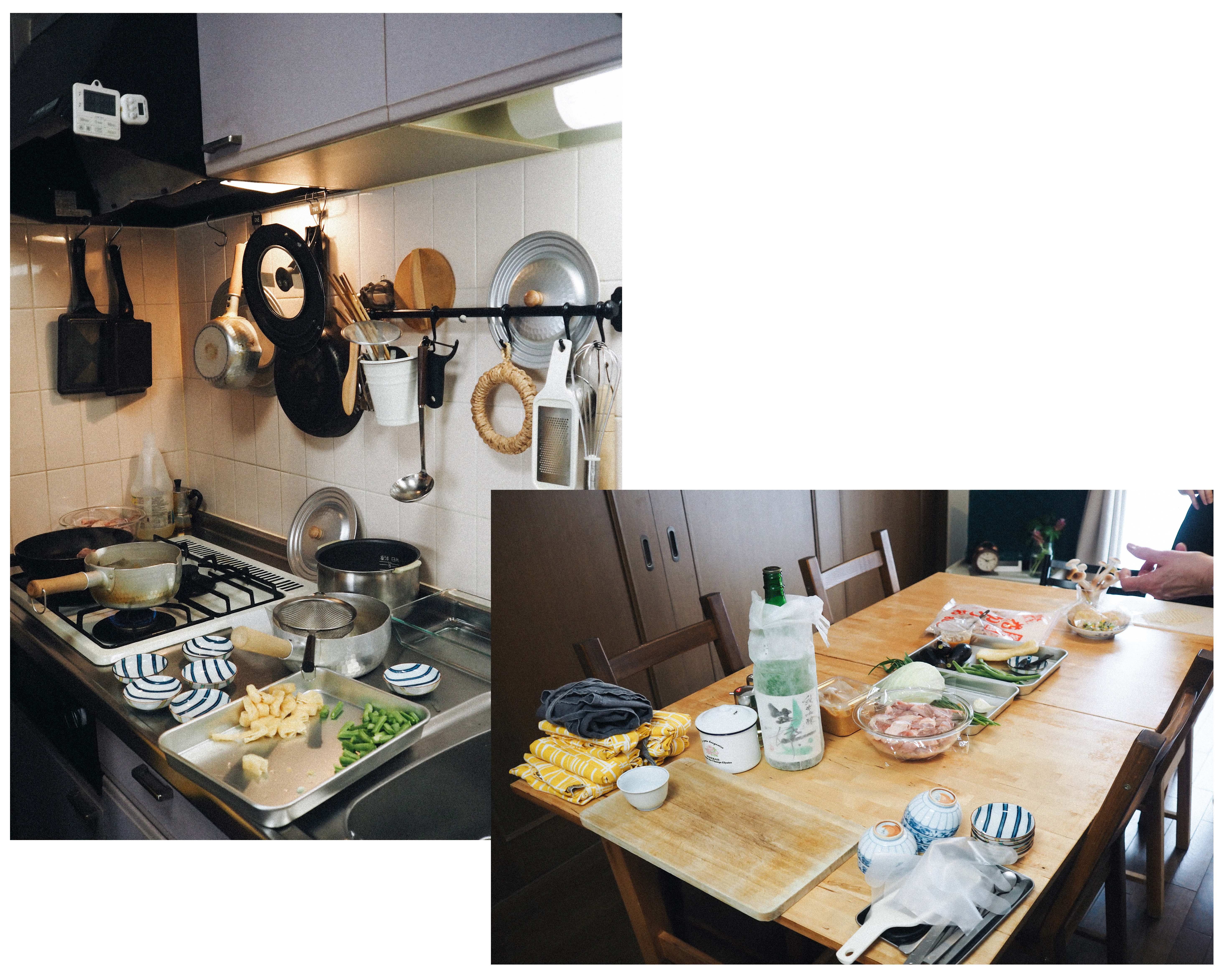 On the day, we met Mayuko at a train station along with 3 others that will be joining us (The classes are always intimate and kept to a maximum of 5 guests!). Mayuko herself is very charming. She is a mother who is bright and has an infectious personality, and her English is very good too! After introductions, we were all brought back to her house to get comfortable and to see what we were cooking for the day. This time the main dishes were: Gyoza (Japanese pan fried dumplings) and Teriyaki Chicken. Some sides included grilled eggplant and seasoned cucumber as well as traditional Japanese Miso soup!

All ingredients were purchased already by Mayuko beforehand. A great thing about her cooking class is that she will cater for any dietary requirements. My partner doesn’t eat pork and I let her know beforehand so she went out and bought chicken meat for him to use in his gyoza’s instead of pork. It’s that thoughtfulness that goes a long way! 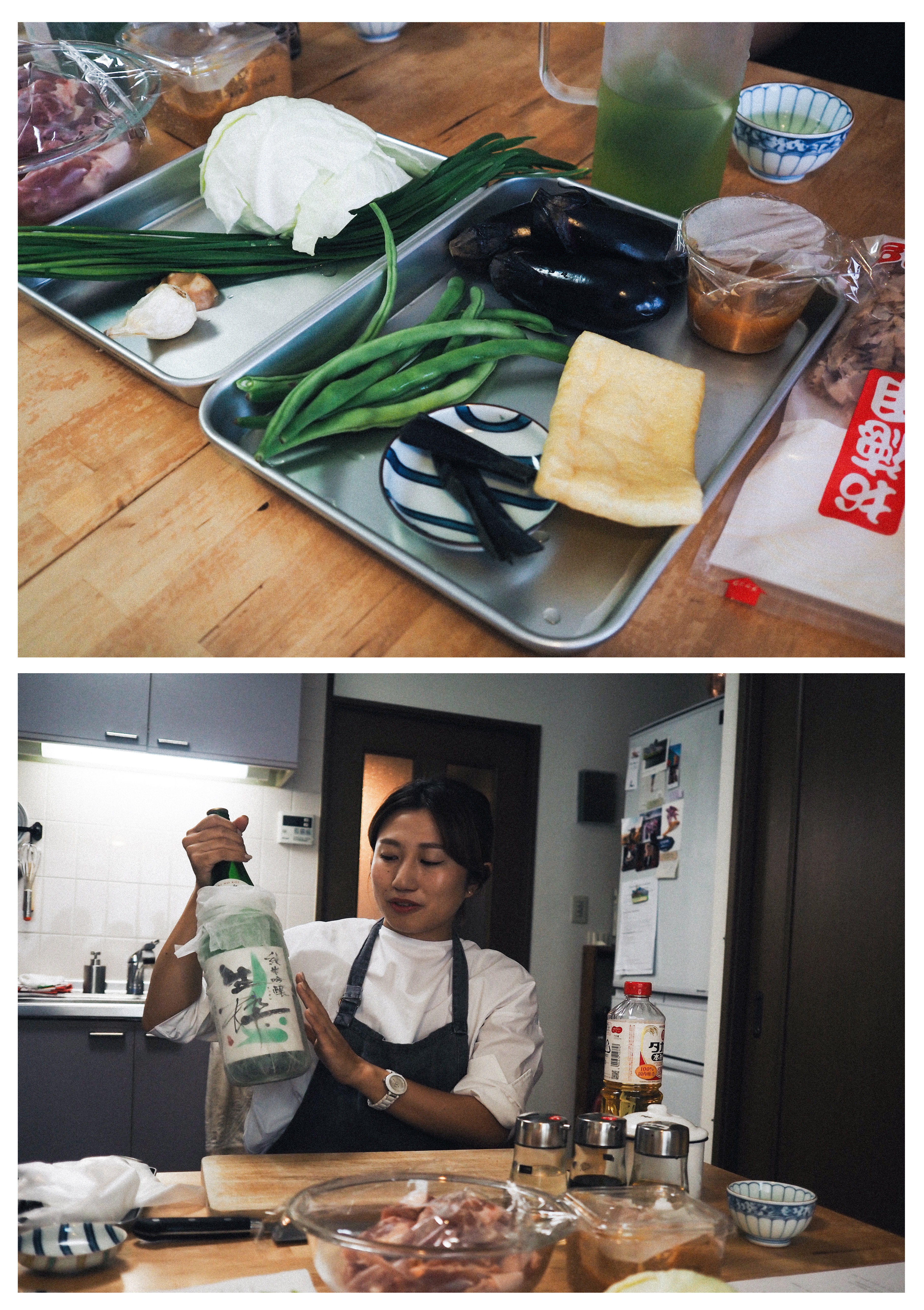 Cooking in such an intimate setting was so much fun. Not only did we get a chance to prepare and cook the ingredients, but we also got to learn about each other and where we all came from. It was interesting to hear what everyone had been doing so far into their trip and where everyone came from. One of our guests was from New Zealand and had travelled to Japan to join a cruise (lucky her!), and the others were a couple from Norway who had been travelling around Asia before they made their stop in Tokyo. It was so nice to laugh and have a chat with strangers over dumplings and soup making, and is definitely something I’ll always remember.

I also liked that each person had their turn to do something. My job was to grill the eggplants, and then to boil the chicken and remove it so someone else could add the seasoning. After that, we all sat down and individually wrapped our gyoza’s and then helped set up! I definitely didn’t feel left out and always had something to do, an aspect of this cooking class that makes Mayuko stand out. 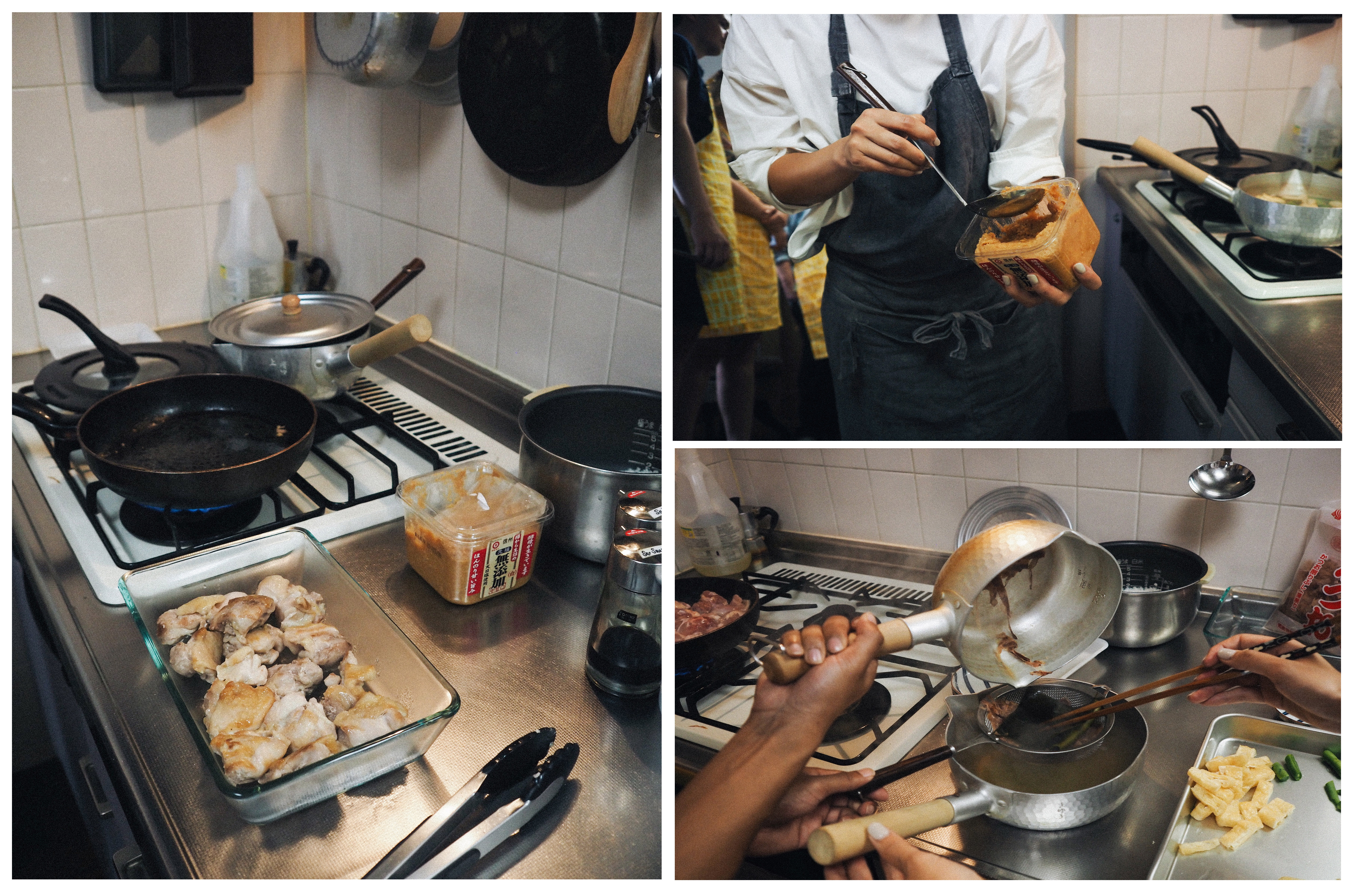 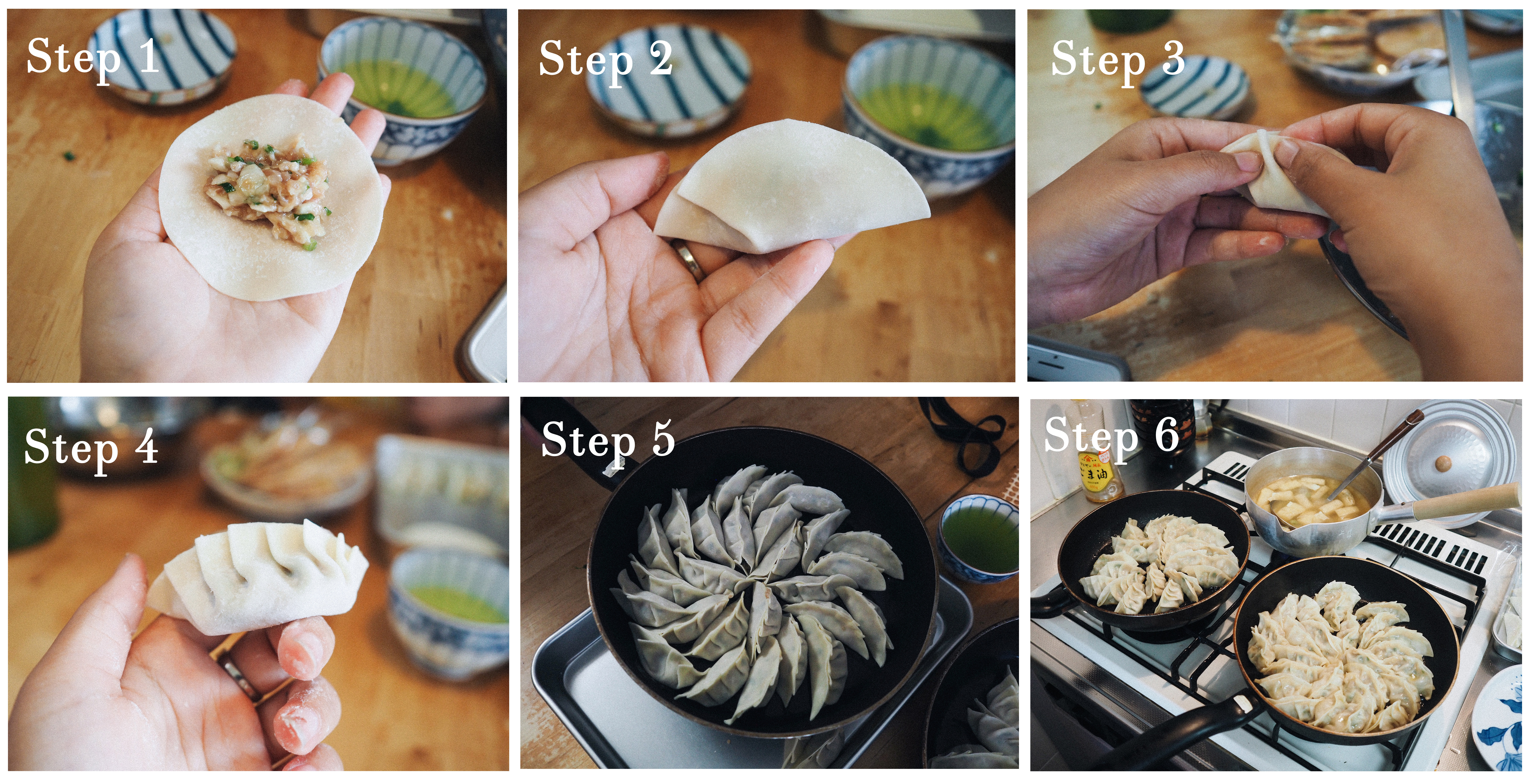 At the end of the meal, Mayuko taught us the traditional Japanese meal prep and set up. Plating in Japan is very precise and arranged, each cutlery and dish has a specific position it must be placed in for everyone on the table. This is because Japanese people have found that a meal is easier to eat once the dishes are in a certain position, and also the meal looks balanced and more aesthetically pleasing due to where the dishes are placed. All dishes were scooped to represent a mountain formation. Rice and soup were placed at the bottom left and right respectively, and the main dish was placed at the top right. Then the side dishes are placed in the center and top left to get rid of any space. Lastly, chopsticks were placed nearest to the person eating the food with a cute little chopstick holder to rest the utensils on when you’re not using it. 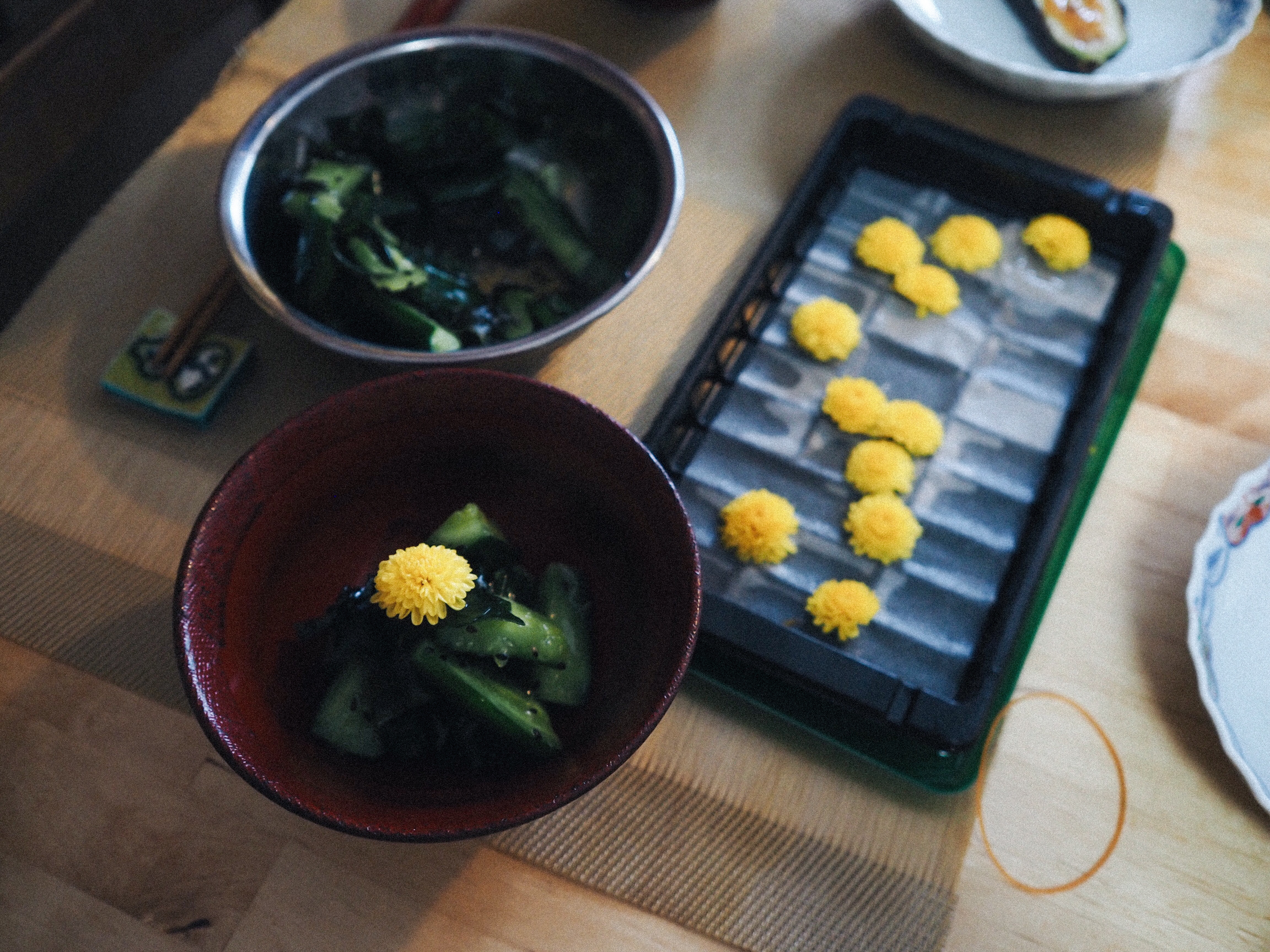 It’s no surprise that the food turned out amazingly delicious! It was my first cooked meal in Japan and everything tasted fresh. Unlike places where the quality of ingredients are unknown, I saw first-hand the unique seasonings and cooking methods Mayuko used to teach us, so I knew what I was eating was done very skilfully. The gyoza’s were panfried to perfection, and in the end everyone had eaten everything! It was the perfect amount of food and we were actually quite full towards the end of the meal. Mayuko also gave us some fresh matcha iced green tea that she blended herself which was a perfect accompaniment because it was so hot outside.

At the end of the meal, we stayed and chatted for half an hour more. By this point, we had already begun to feel familiar with each other and spoke about the rest of our plans for this trip and what else we were going to do. Mayuko also told us about her life in Japan and was very welcoming for us to stay as long as we wanted. What I especially enjoyed was when she took her time to give us recommendations on where to go around Tokyo. She already knew I was a blogger, and wrote down a list of fashion and makeup stores that she thinks I would love to check out. I also told her we were shopping for skincare and gift items and she again wrote down her recommendations along with where they were located and which stations to take. Her consideration and thoughtfulness really touched me as that was an added bonus of her as a host!

Mayuko’s Little Kitchen was a fun break away from travelling and I would highly recommend taking one of her classes if you want to learn more about the Japanese culture and how people go about their lives. It was a wonderful experience being able to cook local food first hand, especially with someone so experienced! With my Japan trip being over, I can’t help but to think of all the activities I’ve done, and I can’t wait to try and recreate these dishes myself at some point. Even if you’re not a seasonal cook, Mayuko’s teaching is very patient and individualized, so she can tailor the class to be slow paced. By the end of the class, I’m sure everyone will walk out a pro chef – trust me.